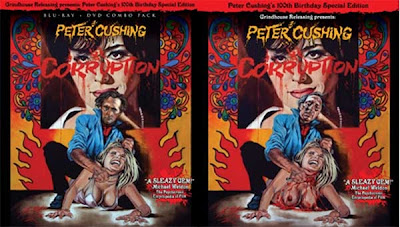 Here is the press release info:

Grindhouse Releasing’s spectacular new hi-def presentation of CORRUPTION was created from original vault elements and restores scenes originally deemed too graphic for American audiences. Packed with a wealth of amazing bonus features, the disc is an essential purchase for horror fans on the occasion of Cushing’s centenary.

"Peter Cushing has always been my favourite actor," says Grindhouse Releasing co-founder and disc producer Bob Murawski. "Therefore I am absolutely thrilled to have the opportunity to release CORRUPTION. It's an overlooked, underappreciated gem in the Cushing canon, a psychotic super-shocker that fully delivers in every way."

Specs for the CORRUPTION disc are as follows:

· PLUS - the "International Version" of the movie with bloody violence and nudity presented for the very first time in America!

· Liner notes by Allan Bryce, editor of the celebrated British horror magazine The Dark Side

CORRUPTION is among the first Grindhouse Releasing titles to hit Blu-ray, along with Amos Sefer’s cult classic AN AMERICAN HIPPIE IN ISRAEL, which is expected to sell out its limited edition run based on current pre-orders. Both films will also be playing select theatres this fall.
Posted by Midnight Media at 21:30