DAWN OF THE DEAD ARTWORK COMPETITION 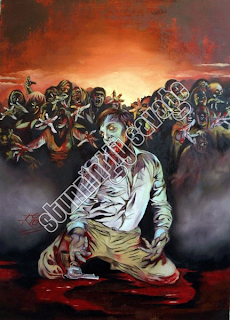 Artist Rick Melton has created some stunning paintings for DVD company Arrow for films such as TERROR AT THE OPERA, THE CARD PLAYER, DAWN OF THE DEAD, DAY OF THE DEAD, etc., and we have a limited edition A4 mounted print of DAWN OF THE DEAD as a prize for one lucky entrant in our competition courtesy of www.theserialman.com - the official licensed website for his prints. Here you will find a huge selection of Rick's art including many splendid Hammer Films tributes. To be in with a chance of winning this DAWN OF THE DEAD print (please note that the text across the pic does not appear on the actual item) you need to answer this question:

George A. Romero's original DAWN OF THE DEAD was a sequel to which film?