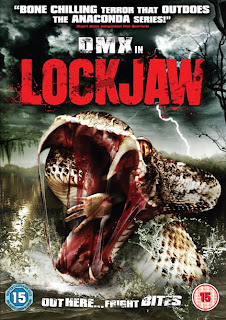 On 10th May 2010, in the tradition of MEGA SHARK VS. GIANT OCTOPUS, Metrodome Distribution are releasing the toothy terror flick LOCKJAW onto UK DVD. The film stars Hip-Hop Superstar DMX and a big snake!

A voodoo curse, thought buried in the mists of time, reignites the fanged horror of the infamous Kulev Serpent - the gargantuan ‘Lockjaw’.

When his wife is killed in a devastating accident by delinquent holiday-makers, distraught Alan Cade calls upon demonic forces he can barely comprehend to exact his revenge. Once summoned, Alan realises too late that this ancient evil cannot be tamed or reasoned with. It will stop at nothing and no one will be spared.

Now the only thing that stands in its way is Army Special Ops veteran and master hunter Nick Kirabo (hip hop superstar DMX – "Cradle 2 The Grave", “Never Die Alone”), who has been waiting for ‘Lockjaw’ to return.

Name the movie in which DMX co-starred with Steven Seagal?